(from the December 2007 SHAF Newsletter)

Since the guns fell silent more than fourteen decades ago, tens of thousands of books have been written about America’s Civil War. Historical journals and popular magazines with a sole focus on the war have flourished, and Civil War battlefields and historic sites are visited by millions each year. Scores of television documentaries and big-screen Hollywood films concerning some facet of the conflict have been produced. The Civil War remains the most studied aspect of American history, and there seems to be no satiating the fascination of not only Americans, but of folks worldwide, with the fratricidal struggle.

Yet, for the all the books and magazines, and for all the films and documentaries, students of the American Civil War know that there remains a hidden history, filled with little-known engagements, forgotten episodes, and overlooked personalities. This article will explore the life and service of one such overlooked figure, who has seemingly dwelled in those vast halls of historical obscurity since the cessation of hostilities: Brigadier General James Nagle. 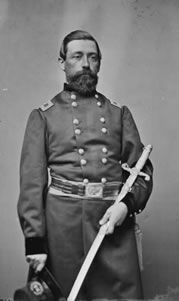 Born on April 5, 1822, in Reading, Pennsylvania, James Nagle received no formal military education, but from a young age he displayed an avid interest in martial endeavors. In 1840, after his family had settled in the Schuylkill County seat of Pottsville, eighteen-year-old James Nagle organized the Washington Artillerists, a militia company that he regularly drilled and actively maintained. With the outbreak of the Mexican-American War in 1846, Nagle volunteered the service of his company, which was mustered in as Company B, 1st Pennsylvania Volunteers. As its captain, Nagle led the company from the siege of Vera Cruz to the capture of Mexico City, seeing much action along the way. Mustered out in 1848, Nagle and his men returned to Pottsville, where an appreciative citizenry presented the young captain with a beautifully inscribed sword of which he was very proud. In fact, Nagle carried this sword throughout the Civil War, and can be seen holding it in most of his wartime portraits.

In the years before the outbreak of civil war in 1861, Nagle continued his trades as housepainter and wallpaper hanger and in 1852 was elected sheriff of Schuylkill County. Following the capitulation of Fort Sumter, Governor Andrew Curtin commissioned Nagle colonel of the 6th Pennsylvania Infantry, a three-month organization that served under General Robert Patterson in the Shenandoah Valley. In August 1861, Curtin authorized Nagle to raise a three-year regiment, which one month later was mustered into service as the 48th Pennsylvania Infantry, recruited almost exclusively out of Schuylkill County. Impressing his superiors with his military ability, Nagle was elevated to brigade command in April 1862, in the 9th Army Corps. He led his brigade at the battles of 2nd Bull Run, South Mountain, and Antietam, where his regiments were tabbed to assault the Burnside Bridge. His promotion to brigadier general eventuated in September 1862, being highly touted by both Generals Jesse Reno and Ambrose Burnside.

Personally courageous, Nagle was always in the thickest of the fray. He barely escaped capture at 2nd Bull Run, and at Fredericksburg, nearly lost his life to an artillery shell while leading his men toward the impregnable Confederate position at Marye’s Heights. He was respected by his superiors, and beloved by his troops. In October 1861, he was presented a fine glass from his former soldiers of the 6th Pennsylvania, accompanied by a letter that testifies to Nagle’s qualities as a military commander: “during the three months we served together, though inflexibly firm and persistently industrious in the performance and requirement of every camp and field duty, yet such was the kindness of your demeanor, and tender regard for the health, safety and comfort of your men, the we regarded you rather a friend and father, than a mere military commander.”

In the spring of 1863, Nagle began to suffer from the effects of heart disease. Following his doctor’s advice, he reluctantly tendered his resignation in May and returned to Pottsville. His immediate superior, Samuel Sturgis, forwarded Nagle’s resignation with much regret. In a heart-felt letter, Sturgis wrote that through his “intelligence, energy, zeal and courage, and unassuming deportment, withal, Gen. Nagle has endeared himself to this command, and will carry with him the love and respect not only of those gallant troops he has led so often to victory, but of all who have had the good fortune to know him.”

Nagle did not rest for long in Pottsville. With Robert E. Lee’s men making their way north to Pennsylvania in June, he raised the 39th Pennsylvania Emergency Militia, which he commanded until August, after Lee’s men were turned back at Gettysburg. The following year, Nagle recruited his fourth regiment of volunteer soldiers, the 194th Pennsylvania, a Hundred-Days unit, which was stationed in Baltimore during Jubal Early’s raid through Maryland. Mustered out for the final time in November 1864, Nagle continued to suffer from his affliction, and on August 22, 1866, he passed away. He was just forty-four years of age, and left behind a widow and seven children.

James Nagle was, and remains, Schuylkill County’s foremost citizen turned- soldier. As a tribute and in memory of their beloved leader, the veterans of the 48th Pennsylvania raised money to have a statue of Nagle placed upon the regimental monument at Antietam. At the dedication ceremony, on September 17, 1904, the former surgeon of the 48th Pennsylvania, William Blackwood, reminded those in attendance that it was here, at Antietam, where Nagle received his promotion to brigadier general, and, said the feeble veteran, “never did a soldier win the distinction through a harder road, for his whole time of service this more than brave gentleman and splendid soldier devoted his every energy to the cause for which he left his home and family, and supported by his gallant men, he won imperishable fame.”

With the passing of time, it seems that Nagle’s fame has proved contrariwise. His statue at Antietam still stands; his gaze still transfixed toward the north. But there is something missing from the monument. When it was first unveiled over a century ago, there at his side was sculpted a bronze replica of that Mexican-American War sword, which he so highly treasured. That sword is now gone. When, or how, it disappeared, no one seems to know. And few realize it was ever there. Perhaps by restoring that sword, and having it replaced, we can, in turn, help restore Nagle’s overlooked service, and help rescue him from those vast halls of historical obscurity.