(from the December 2009 SHAF Newsletter)

In hopes that it may interest our readers, and to give them a taste of the memoirs of many veterans of the battle, we will from time to time run a few letters from men who survived the battle.  These letters come from the National Archives Antietam Studies files, transcribed for clarity.

Here is a letter from Capt. John D. Frank, Commanding Battery G, 1st NY Light Artillery.  Formerly a Private, Corporal, Sergeant and First Sergeant of Light Battery A,  2nd U.S. Artillery, Frank was made Captain of this volunteer battery early in the war.  He served under Brevet Maj. Henry J. Hunt, Brevet Maj. John Sedgwick, Brevet Lieut. Col. Horace Brooks, Capt W.F. Barry and Capt J.C. Tidball before the war, and  commanded his battery with distinction at Antietam.  He was mustered out of the service in the spring of 1863.

Your letter herewith enclosed was received by me yesterday, having been forwarded by Capt. Ames, who as Lieut. in Battery “G 1st NY. Light Arty; was absent during the Antietam Campaign on account of sickness contracted during the Penninsular Campaign. In my endeavor to answer you questions for any practical purpose, I am compelled to violate rules of brevity.

1st On the night of Sept. 16th the Battery was not in line.

2nd On the morning of Sept 17th, when the Battle commenced was advancing to, and in Column of Sections, awaiting orders, about 1/2 mile to the right of and in a direct line with Dunker Church and about 1/4 mile in rear of said line.

3rd Upon Sedgwick’s repulse advanced (without orders) to a Ridge about 1/2 mile in line with and to the right of Dunker Church; to the head of a Ravine, commencing at the foot of Dunker Church Woods, crossing the Ridge and ending in a piece of heavy timber in our rear, said position being taken to prevent the threatened advance of three hostile Brigades forming at the foot of the Ravine behind the Dunker Woods, with the evident intention of taking French (who after  Sedgwick’s repulse and before Smith’s arrival was thought to be our extreme right) in flank and rear.

If more accurate information is desired, would respectfully refer you to Col C. D. Green, Adjt. Gen’ls. Dept. who, as Ass’t. Adj’t. Gen’l. of Smith’s Division gave me the 6th Maine of Hancock’s Brigade in support, visited the Battery several times during the heaviest part of the engagement, and for the purpose of his field report would naturally take close notice of topography. He will more readily remember Capt. Frank as the First Sergeant of Brooks’s and Barry’s Lt. Batty in 2nd U.S. Arty, while himself serving as Lieutenant of said Regiment at Fort Leavenworth.

Restoration of the East Woods

(from the December 2009 SHAF Newsletter)
by Tom Clements, SHAF President

A misty and cloudy day did not dampen the spirits of 15 SHAF members who gathered on Saturday November 14 to replant a section of the historic East Woods.  The last of the three major woodlots on the northern end of the field, East Woods was much larger at the time of the battle than its current footprint.  Starting last year the Natural Resources group at Antietam began to plant seedlings in a five acre patch adjoining the current woodlot.  Our members pitched in with a will, and by noon had planted several dozen seedlings in a cleared lot just south and east of the Cornfield.

Although the weather was moist, no hard rain fell, and the damp soil is ideal for tree planting.  Our work will be obvious to visitors from the Cornfield tour stop, look for the tubes used to protect the seedlings from the many deer that live in the park. 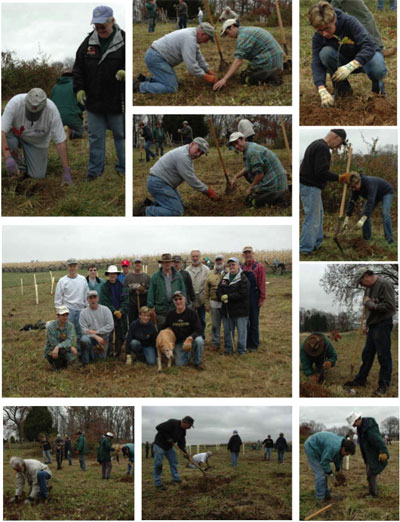 Our semi-annual Work Days have become a tradition at the battlefield, and the effort to restore the historic scenery of the field is appreciated by the park staff and visitors.  We usually work on Saturday mornings, once in the spring and once in the fall.  Watch our website, SHAF.org for announcements of our next date.