(from the July 2009 SHAF Newsletter)
by Joseph Stahl

One of the soldiers at Burnside’s Bridge September 17, 1862 was Private Ara W. Adams of Company F of the 9th New Hampshire Infantry. Private Adams had mustered in on August 5, 1862, joining Company F at Concord New Hampshire. He enlisted for 3years and was paid a bounty of $25. He gave his age as 18 although there are some indications in his pension files that he was only 16 or younger. (In the 1850 census Ara is shown as age 2! Which would make him 14 or 15 in 1862)

However, an interesting comment in one of the records in his pension file says that Ara’s father (first name not given just the initials S.E.) was in the same regiment as a musician. In the regimental history roster there is a Sylvanus Adams age 36, principal musician, although his hometown is different.  Also that matches the father’s name in the 1850 census. So his underage enlistment must have been known to some men in the regiment.

Ara’s status is shown “not stated” from August 23 to Aug 31. He is shown as”present” Sept/Oct 1862 and Nov/Dec 1862. The 9th New Hampshire was mustered into the service of the United States between July 3 and August 23, 1862. The regiment arrived in Washington D.C. on August 27, 1862 and went into the defenses of Washington. After the Battle of 2nd Bull Run when the Union Army was reorganized, the 9th New Hampshire was assigned to Colonel James Nagle’s First Brigade on September 6, 1862. In less than a month the 9th including Ara would have its first taste of combat by engaging the Rebels on September 14 at South Mountain.

At Antietam the 9th was ordered to cross Antietam Creek at the Rohrback Bridge. Colonel Nagle’s brigade made the second attempt to cross the bridge. The 9th was placed in support of the attack by the 2nd Maryland and the 6th New Hampshire. The attack was not successful; however, the 9th would cross the bridge after the successful attack by Brigadier General Edward Ferrero’s Brigade. In the fighting the regiment would lose 10 men killed and 49 wounded.  Private Adams was not one of the wounded so he survived his first two combat actions. 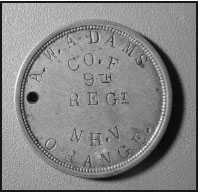 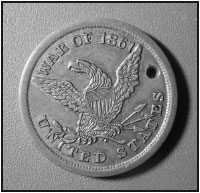 Probably in the fall of 1862 Ara [bought this] brass ID tag. It is typical of those sold to the soldiers by the sutlers. This style is based on the U.S. $10 gold coin of the period. Scoville Brass Company of New York made tokens with the same design as early as 1858. On it is stamped A.W. ADAMS CO.F. 9th REGt. N.H.V. ORANGE. He might have bought it before the Battle of Antietam while the regiment was stationed in Washington D.C. This style of ID tag was being sold as early as February 1862 to other units.

After the Battle of Antietam the regiment returned to Virginia and was engaged at the Battle of Fredericksburg. On Jan 24, 1863 Ara is shown as “absent” in hospital in Washington DC. In his pension records he is reported at the Aquia Creek hospital on Dec 29, 1862, then the Armory Square Hospital in Washington. After three months Ara was granted a furlough of 30 days to return to the hospital in Concord New Hampshire. He spent 30 days there and then went to the Convalescent Camp at Lexington from there to the Covington Hospital. On the bimonthly return for July/Aug 63 it is noted that he is sick and in Covington hospital near Lexington Kentucky. At that time Private Adams owed the government $9.22 for transportation. This was probably for his travel while on furlough. Ara moved again that fall and went to the Camp Dennison Ohio hospital remaining at the hospital until Jan 15, 1864 when he was transferred to the Invalid Corps.

After joining the Invalid Corps Ara was in Indianapolis Indiana and while there had a reoccurrence of fever caused by exposure and severe cold while guarding rebels according to a document in his pension file. Some time in this period he had his second toe on his left foot amputated, his files are not clear as to the date. After this Ara was discharged on Nov 14, 1865. His records show that on the regimental muster out roll dated June 10, 1865 he had last been paid on Oct 31, 1862(!!!) and was still due the other $75 of his bounty. On Nov 15, 1865 he began receiving a pension of $2 per month for the lost of the second toe on his left foot. After the war Ara married, possibly twice, and had two children. Ara died on April 25, 1897, his wife survived him until October 4, 1936.