At last, a long, difficult, issue for SHAF has finally been resolved. Please indulge me for few moments as I review the whole thing. One of the first great successes of SHAF was the purchase, in 1991, of 40 acres of land on the farm where President Lincoln met with General George McClellan in October of 1862. Slated for development, we were able to utilize a grant from the Maryland Environmental Trust and grants from the founders of Civil War Preservation Trust. We eventually placed easements on the land and re-sold it. While this process was in progress the state of Maryland purchased a 5 acre adjacent tract also designated for development.

In 1999 we were offered for purchase this five acre parcel by the Maryland Department of Transportation (MDOT), pursuant to a protective easement which they required as a condition of the sale. We negotiated an easement with them and with Maryland Environmental Trust (MET) which ultimately allowed a small, 300 sq. ft, parking lot.

Several years later we actively supported the Civil War Trails program to mark the significant Civil War sites in Washington County. When the Trails committee expressed a desire to place an interpretive stop on this land, we reminded the assembled representatives of MDOT, Office of Tourism Development (ODT) and other agencies about the easement and the limitations of using that land.

When we signed the permission for MDOT to build the lot we had no knowledge that anything other than the 300 sq. ft. lot was planned for this land. We never saw a plat, a plan, nor any design showing what was intended for our land. You can imagine our shock when we saw a large, approximately 1,000 sq. ft., asphalt paved lot under construction in early 2006. We also objected to the out-of-context rail fence and trees, neither of which were there in 1862. 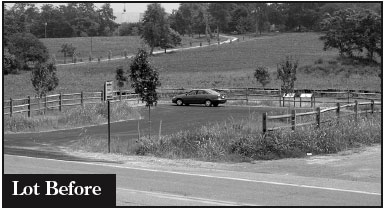 We immediately contacted all the parties involved, discovered the large lot was a result of miscommunication and recommendations for highway safety.

After several discussions and meeting SHAF made our point clear that we need to rigorously protect our easements. We were assured in late 2006 that the lot would be removed, but it would take “several months.” Our concern was that amending the easements to include the expanded lot, would not serve our interests, nor the interests of MET since they own easements on nearly 5,000 acres around the battlefield.

Yet we were reluctant to cancel out the tour stop which explained what happened there on the Steven Grove farm in 1862.  It was at this farm where Lincoln met with wounded soldiers of both side shortly after the battle of Antietam. It was also at this site that Lincoln urged McClellan to pursue the Confederate army into Virginia before the weather turned too cold. Thus we faced a real dilemma of balancing the interpretation of the campaign and the limits of the easements.

Finally after, much discussion, some very clever suggestions for alterations, some delays for finalizing the design, solicitation of bids, bad weather and the usual red-tape, the parking lot has been re-sized to meet the legal parameters of our easement, but still preserves the final stop of the Civil War Trails driving tour for the Maryland Campaign.

Although the process has been long, slow and complicated, we are thrilled to finally have it resolved. We really see this effort as a win-win effort as the Civil Trails still has the plaques there, and we have protected the integrity of the state land easements.

Our thanks go to everyone for their patience and perseverance through this multi-year process.