(from the December 2007 SHAF Newsletter)
by Dr Mary Abroe

Harry Smeltzer, newest director of the Save Historic Antietam Foundation, joined the board in 2006. A residential real estate appraiser with his own business in Pittsburgh, Pennsylvania for the past eleven years, Harry has been an instructor at Pittsburgh’s Realtor’s Educational Institute over the same period; there he teaches courses in Valuation of Residential Properties as well as Certified Appraiser continuing education classes. Prior to 1996 he worked as an appraiser, financial planner and analyst, accountant, and auditor in western Pennsylvania (Pittsburgh and McKeesport) and nearby Weirton, West Virginia. When asked about the wellspring of his interest in history and the Civil War, Harry responds that “like every other kid in Pennsylvania, I went on a field trip to Gettysburg when I was nine or ten.” That visit helped spark a fascination that eventually generated, among other things, his own Civil War blog and involvement in several on-line discussion groups as well as his current leadership role in SHAF. Regarding the Civil War, he calls himself “more of a big picture guy” with multiple interests, including preservation, rather than one who focuses solely on commemoration and preservation. 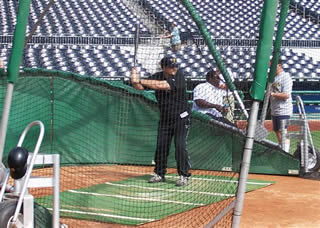 Born and raised in McKeesport, Harry Smeltzer graduated from Penn State University (University Park) with a B.S. in finance in 1982. He also received a Master of Business Administration (with a marketing emphasis) from the Katz Graduate School of Business in Pittsburgh in 1989. With his lifelong residency in the Pittsburgh area, it is no big surprise that Harry holds season tickets for the Pittsburgh Pirates (that’s him in the photo above taking batting practice at PNC Park); other pastimes and interests include working with his son’s Cub Scout Pack and monitoring his own library of sixteen hundred-plus Civil War books, including one of his earliest acquisitions, the American Heritage Young Readers Golden Book of the Civil War (with its introduction by Bruce Catton).

Besides the previously noted, Civil War-related activities in which Harry is engaged, he belongs to the Western Pennsylvania Civil War Round Table and writes for America’s Civil War. As part of his role as a contributing writer to the magazine, Harry will be writing book reviews in brief in 2008. Like many Civil War enthusiasts, he has a family connection to the Civil War, in the person of his great-grandfather, John Smeltzer of Blair County, Pennsylvania. Born in 1846, John Smeltzer served in the 205th Pennsylvania, and was wounded at Petersburg. Perhaps unlike others, however, Harry learned of the ancestral connection very recently, long after becoming interested in the Civil War rather than having the personal link open that door.

In discussing his views on the current state of the preservation movement, Harry Smeltzer opines that today’s preservationists sometimes are “too used to preaching to the choir.” Here he emphasizes the need to be “more tactful” in explaining what we see as the merits of preservation to those, particularly landowners, for whom it might not be so clear. Along those lines, Harry believes that we preservationists need to be able to communicate to others in the general public (who remain unsure about why they should care and act accordingly) at least why they should care that preservation is important to us; without reaching that level of communication, he feels, it will be difficult to persuade these people to embrace preservation values.