(from the September 2007 SHAF Newsletter)
by Joseph Stahl

The photograph shown is identified as 2nd Lt. Edward C. Pierce based on what is written on the front of the images. As can be seen in the Photograph Edward wrote “Your friend E. C. Pierce 3rd Me.” The image is a full standing view of an officer holding his hat and wearing a sash and sword standing in front of a backdrop and next to a table. 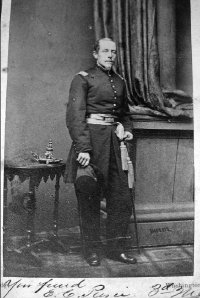 (collection of the author)

On the baseboard can be seen the word “BRADY”. The CDV is a Brady from Washington which can also be seen on the front of the image although the “B” has been trimmed off at some point. There in nothing printed or written on the reverse of the image. At the National Archives the service records of Lt. Pierce’s were copied and reviewed.

According to Edward Pierce’s records he mustered into Company B on August 8, 1861 as a 2nd Lieutenant. Lt. Pierce’s status is shown as “not stated” for the Sept/Oct 1861 bi-monthly return. On the Nov/Dec 61 return is the note “Detailed to act as Signal Officer in U.S. Signal Corps by Special Orders from HQ AP recd Dec 24, 1861. Since Edward was assigned to the Signal Corps in December, 1861 the image was probably taken in the fall of 1861 since he has identified himself with the 3rd Maine not the Signal Corps.

Edward remained assigned to the Signal Corps until his muster out on June 28, 1864. While he was assigned to the signal corps Edward would be present at some of the most important events in the history of Army of the Potomac. Edward was promoted to 1st Lt. On May 1, 1862. On September 17, 1862 he was on the field at Antietam as a signal man. In fact he is included in several of the most well know images taken by Alexander Gardner on the field.

In Antietam: The Photographic Legacy of America’s Bloodiest Day by William A. Frassanito, the author talks about the photographs taken of the Signal Station on Elk Ridge. On page 75 is the following quote “Views 3a and 3b show the (signal) station from an identical camera position. The flagmen in both views are believed to be facing westward, into the afternoon sun and toward the battlefield. The man seated on top of the tower to the left in 3a is the leader of the detachment, 1st Lt. Edward C. Pierce, who was transferred to the Signal Corps from the Third Maine Infantry in December 1861.”

Shortly after this action he was assigned to 6th Corps Headquarters on Nov 13, 1862. He would remain with the 6th Corps for the rest of his service. Later in the spring of 1863 he was promoted again to Captain on February 25, 1863. After this Captain Pierce would find
himself at one of the most famous locations in the Civil War. He would be stationed on Little Round Top on July 3, 1863. He would serve with distinction and be offered a commission in the Signal Corps in the fall of 1863. Captain Pierce would decline the appointment on September 24, 1863. He stated that he wished to remain an “Acting Signal Officer” so that he could go home when his three year term of service was up in

1864. Also he requested that he be allowed to remain with the Signal Corps and not be returned to the 3rd Maine Infantry. This was allowed and Captain Pierce was ordered to Augusta, Maine on June 14, 1864 to allow his muster out with the regiment on June 28, 1864.