Mark your calendar, and plan now to attend the Sharpsburg Heritage Festival, scheduled for September 13 and 14, 2008 (the Battle Anniversary weekend), and the next SHAF Workday on the battlefield, Saturday, November 1st, 2008.

Advance notice for the Heritage Festival (via Herald-Mail):

Plans are being made for extra parking with a shuttle service. Activities will include two days of live music, demonstrations of Civil War-era dances, historic home tours, an agricultural display area, historic craft demonstrations, history displays and lectures by experts in local history.

For further information or to get involved, please call festival chairman Paige Phifer at 301-432-4631 or publicity chairman Delancy Catlett at 301-223-8386.

One of the most important things we do is keep you informed of what we’re doing with the money you have entrusted to us. It is both a blessing and frustrating that we have not had a land purchase opportunity for some time. The Shepherdstown Ford property owners do not feel any urgency to deal with us, particularly with a slow but steady movement towards including it in the National Park Service. The successful easement purchases of the past two decades have secured preservation of much of the land surrounding the NPS land inside the boundary of the park. That leaves us with few chances to buy land. We do keep a reserve in case something suddenly arises, but we don’t think it is wise to keep holding funds in the bank waiting for a rainy day.

To that end we have met with Park Superintendent John Howard to address critical needs within the battlefield. Government funds are tight and the needs are great, and so from time to time we help out. Supt. Howard has always gratefully acknowledged the SHAF donations for the restoration and interpretation of the battlefield.

The most recent, and one that I want to tell you about, is the Joseph Poffenberger House, which is located just north of the North Woods. This house, perhaps the oldest on the battlefield, came into NPS possession a few years ago. Park staff members have begun stabilizing and restoring some of the outbuildings and barn, but the house needs immediate attention. Supt. Howard offered us a challenge. He needed funds to paint and repair the exterior wood siding of the house. He said he could come up with $10,000 from his budget to do the work this summer, if SHAF could match that figure. We have taken on this challenge.

We need donations to meet this challenge as the house desperately needs repair and paint to protect it from the elements. We know you have helped us in the past, and we hope you can help us again. As always, we are grateful for any and all help that you can provide. 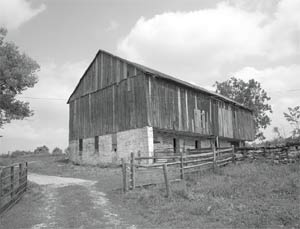